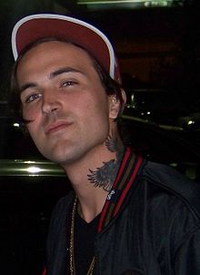 Atha was born on December 30, 1979 (age 31). He is of European-American and Cherokee Native American ancestry. Born Michael Wayne Atha to an absentee father and a bartender mother, he attended over 15 schools. He became interested in hip hop at a young age. He has stated that he started rapping around the age of 14. As well as adding sounds of the classic rock bands he'd grew up hearing rap as well. He was influenced to rap by Andre 3000.

Yelawolf released his underground debut album, CreekWater, on June 28, 2005. Yelawolf got signed to Interscope Records in 2008 and began releasing mixtapes, his most popular being his 2010 release, Trunk Muzik 0-60. In January, 2011, YelaWolf signed to Shady Records with Slaughterhouse. Slaughterhouse and Yelawolf both featured in Eminem's song "2.0 Boys" which was leaked in early April of 2011.

Yelawolf appeared on the magazine cover of the January issue of XXL magazine with Eminem and Slaughterhouse.

Retrieved from "https://rap.fandom.com/wiki/Yelawolf?oldid=16083"
Community content is available under CC-BY-SA unless otherwise noted.