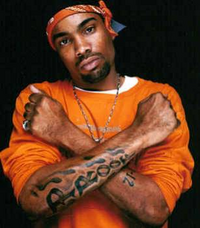 DeShaun Dupree Holton (born October 2, 1973, died April 11, 2006 ), better known as by his stage name Proof or alter-ego Derty Harry, was a Detroit-based rapper and prominent member of D12. He was shot and killed on April 11, 2006, and pronounced dead on arival. Proof was married to Sharonda Holton. They have 3 children together, DeShaun Rice Holton, Elija Abel Holton, and Katieva Walker Holton. Deshaun also has two other children from two other mothers; Naeem and Nasaan. Proof had custody problems over Naeem which resulted in not seeing him as much as he wanted.

DeShaun Holton was born on October 2, 1973 and was raised by his single mother, Pepper Holton in Detroit, Michigan. Proof's father produced music for rock bands and underground groups before leaving the family at Proof's youth. Proof went to a private school before going to Osbourne High. Holton met Marshall Mathers (Eminem) during their teenage years outside his all black school and shared a love for hip hop music. Holton took the name MC Proof and joined the rap group Soul Intent with Eminem. Eminem and Proof playfully called each other "Doody".

﻿In 1992, Proof joined the Detroit rap group Soul Intent which then consisted of Eminem, DJ Buttafingas, and Chaos Kid. He was also in a gorup called 5 Elementz or 5ela with Thyme and Mudd. 5 Elementz released 3 albums with Proof as a members. Proof later on joined D12 in 1995, working with them on their debut The Underground EP. He also worked with Eminem on his underground debut Infinite, appearing on the "W.E.G.O" skit and rapping the chorus on "Backstabber." Proof made his 1996 album Anything, with appearences from D12 members. Proof continued to appear in rap battles, signing up Eminem to battle at the "Rap Olympics" tournament in 1997, Eminem coming 2nd to MC Otherwize. Proof and Eminem were in D12 together, as well as good friends.

Proof went solo in the mainstream in 2002 with the Electric Coolaid Acid Testing EP. He then released his first mainstream albuuum, I Miss The Hip Hop Shop in 2004, the same year Eminem released Encore and D12 released D12 World. Proof released a mixtape called Mayor of Detroit with an appearence from Eminem.

In 2004, DeShaun Holton was arrested for "public possession of firearm(s)" along with fueding rapper Royce da 5'9". The two were arrested on the same charges at the same day. They only served 30 days in prison, bunking in the same cell, working out their "beef".

Earlier in his life, he was also arrested for shooting paintballs at unidentified individuals, along with Eminem and Champtown. None were sentenced.

Proof has fueded with rappers such as Ja Rule, Royce da 5'9", Canibus, and the group Limp Bizkit. Proof's solo song "Ja In A Bra" from I Miss The Hip Hop Shop is a diss track aimed at Ja Rule.

Proof was at the CCC Club in Detroit, Michigan on April 11, 2006 playing pool with Kieth Bender, Jr. He got into a fight with other customers at the CCC Club. One of them, bouncer Mario Etheridge, pulled out a gun and shot Holton four times; in the head and chest/stomach area, he died imediately. His friend, who wished to remain anonymos, was next to him, some of his blood catching on his shirt. Keith Bender also got shot in the head. Proof's friend carried him to his car and drove Proof to the hospital, where he was pronounced dead on arival (D.O.A.).

Pepper Holton, Proof's mother, started The Proof Foundation after his death which kept the memory of her son alive through his music and D12 performances. Many rappers have praised Proof and rapped about his life and death. The most noted artist who has rapped about Proof was his best friend, Eminem. Eminem spoke about Proof's death in "You're Never Over", and "Going Through Changes." Eminem has said his cause of going to rehab was to make Proof proud of him, due to Proof's wanting of him to get sober. In Eminem's 2009 album, Relapse, he dedicated it to Proof saying in the album booklet, "Proof, Not a day goes by where I don't think of you. If it wasn't for you, I wouldn't be here now. So, I've decided to come back and dedicate every song to you, because I couldn't find just one that honors you enough. And together we can show everyone what this is all about. I love you 'Doody'. Love, 'Doody'."

Proof was thought of having killed Keith Bender, Jr. However, the two were in a "club brawl" as both drew guns and fired resulting in the death of Bender. Had Proof survived, he would have been charged with murder and publical drunkeness, his alcohol inoxication level having been .32 which was way over Detroit's legal level of .8. Eminem stated at Proof's funeral, "Proof was no killer. He just had a short fuse."

Proof was remembered in 2 posthumous mixtapes, Mayor of Detroit and DJ Jewel Presents: Time A Tell.

Retrieved from "https://rap.fandom.com/wiki/Proof?oldid=22460"
Community content is available under CC-BY-SA unless otherwise noted.