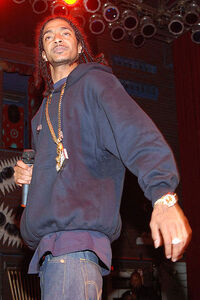 Ermias Joseph Asghedom was an American rapper better known by his alias Nipsey Hussle. This artist has never charted.

(August 15,1985-March 31,2019 Los Angeles California ) He is known for his mixtapes and is influential. He was shot and killed outside his marathon store by Eric holder a former rollin 60s crip that turned federal informant. Two days later after nipsey murder Eric holder was arrested by the lapd department after a two day search. On April 11,2019 nipsey had a worldwide funeral and was buried in forest lawn cemetery in Southern California where famous celebrities are buried.

Retrieved from "https://rap.fandom.com/wiki/Nipsey_Hussle?oldid=24432"
Community content is available under CC-BY-SA unless otherwise noted.