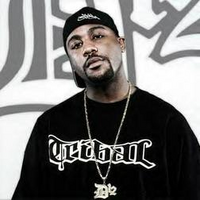 Von Carlisle (born December 10, 1976, age 40), better known by his stage name Kuniva, is an American rapper from Detroit, Michigan and a member of the rap group D12. He debuted his solo career in 2010 with a mixtape. Kuniva is also known by his alter-ego Rondell Beene, and/or Hannz G.

In 1996, Kuniva joined D12. He helped record their debut extended play The Underground EP. Kuniva created the alter-ego Hannz G., which changed to Rondell Beene before D12's first album in 2001.

In 2001, Kuniva worked with D12 as they released their first album Devil's Night.

Kuniva made appearances on albums of rappers in D12, such as Bizarre and Proof. He also appeared in Eminem's 2002 album The Eminem Show with the rest of D12 in the song "When The Music Stops".

Kuniva appeared on the album D12 World with D12 in 2004. During Eminem's hiatus, D12 recorded the Return of the Dozen mixtape released in 2008 while Eminem was working on Relapse. Kuniva made more appearances in songs in the mixtape, taking up Eminem's place for the mixtape.

Kuniva went solo in 2010. On February 16, 2010, Kuniva released his digital mixtape called D12's Own Kuniva Presents: Retribution...The Mixtape. The mixtape featured Bizarre, Kon Artis, and a rapper by the name of Beez.

Retrieved from "https://rap.fandom.com/wiki/Kuniva?oldid=23878"
Community content is available under CC-BY-SA unless otherwise noted.