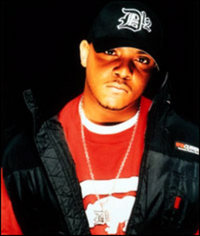 Denaun Porter (born December 7, 1978), better known as Mr Porter and dEnAuN, is an American hip hop DJ and producer as well as prominent member to the Detroit-based rap group, D12. Mr Porter began rapping in 1995 as well as producing. The first album he co-produced was Eminem's Infinite. Mr Porter is also known by his alter ego, "Kon Artis." Ever since the death of Proof, Mr. Porter has been one of Eminem's "hype man".[1][2]

Mr Porter has produced albums and songs for Eminem, D12, Busta Rhymes, and Bizarre. He produced "My Own Way" on Snoop Dogg's 2011 album The Doggumentary.

Retrieved from "https://rap.fandom.com/wiki/Kon_Artis?oldid=19871"
Community content is available under CC-BY-SA unless otherwise noted.