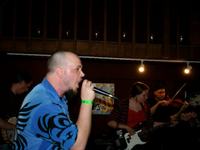 Lynx, or Emcee Lynx is an underground anarchist hip hop artist in Vallejo, California (in the San Francisco Bay Area) who has achieved significant popularity and name-recognition in the West Coast hip hop and underground hip hop scenes and among anarchists and other radicals around the world. He is a member of the group Beltaine's Fire. In 2006, he was described by Donegal Press magazine as "without a doubt one of the hottest rappers in the underground hip-hop scene today" and was described as "The next KRS-One" and the successor to House of Pain. His first name is "Jed".

Religiously, Emcee Lynx is a Druid. Born Christian, Lynx has changed his religon due to personal reasons. He is of half Irish and half Scottish ancestry.

Lynx's politics can be generally described as anarchist, but he also refers to himself as an autonomist, indigenist and feminist and describes his vision of an ideal future as a blend between anarcho-syndicalism and mutualism. He augments the traditional anarchist emphasis on class with a heavy emphasis on culture and history. According to interviews, his major political influences include Noam Chomsky, Ward Churchill, Emma Goldman, Peter Kropotkin, Mikhail Bakunin, Michael Collins, Lucy Parsons, and Mutualists like Pierre-Joseph Proudhon. He was formerly a member of the Industrial Workers of the World and still supports their organizing and links to their website. [1] He is currently a member of the Workers Solidarity Alliance[1] (WSA), a non-sectarian grouping of class-struggle oriented anarchists from across North America that includes Syndicalists, Libertarian Socialists, Especificists, and others.

Lynx's heavy emphasis on history and culture have led him to incorporate traditional Celtic music instruments and melodies into his music (his background is Scottish and Irish), and he has made an overt effort to highlight connections between the colonization of the Celtic Nations and imperialism elsewhere.[2] He is an outspoken supporter of the rights of ethnic minorities, indigenous peoples, First Nations, and stateless nations "from Chiapas to Chechnya, Ireland to Tibet". [3]

He is vocal in his opposition to organized religion[4][5] and is straight edge.

Lynx is also significant because he was an early advocate for File Sharing and was one of the most successful artists in the world in using the Internet as a medium to promote and distribute his work prior to the creation of sites like Myspace and iTunes that helped mainstream online music distribution. As imesh.com [2] put it in August 2002:

"Since the release of his first album (Soundtrack for Insurrection Volume I) in early 2001, Emcee Lynx has gained international recognition in Hip-Hop's Conscious underground as one of the most articulate and innovative of a rising tide of politically active artists - winning him grassroots distribution and a loyal fan base from California to the Czech Republic."

In terms of sound, Lynx is hard to pigeonhole since his sound has changed so much with each album. This is intentional, in interviews he describes his musical vision as trying to "stretch the boundaries of hip hop" as widely as possible, and is thus constantly incorporating new elements. These range from the heavy 'electronic-industrial-metal-hardcore rap' fusion on his first album to smoother trip-hop and funk influenced sounds to bass-driven 'west coast' styles. He produces most of his own instrumentals, but has collaborated with a wide range of producers in several countries. Frequent collaborators include Dub Sea of Working Classic Records in London, England, DJ Phoney of Phoney Records in Cologne, Germany, and Kdubbs of Urban Underground in San Jose, California. The UnAmerican LP (2004) also featured three instrumentals by members of the Live Oak Collective from San Jose.

Lynx has also been a pioneer in Celtic Hip Hop, a new style of Celtic fusion that fuses Celtic melodies with hip hop beats and vocals. His band, Beltaine's Fire is one of the first to play a true fusion of Celtic music and Hip Hop. They have released two full length albums and a free live demo.

Community content is available under CC-BY-SA unless otherwise noted.
Advertisement