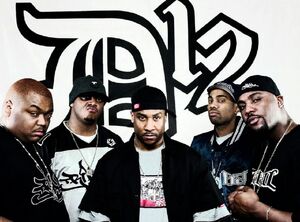 D12 (also known as "the Dirty Dozen" or "D-Twizzy") is a Detroit-based hip hop group started by the late rapper Proof. The group now consists of Eminem, Bizarre, Kuniva, Swift, & (maybe) Mr. Porter. In 1996, when the group formed, it consisted of Eye-Kyu, Eminem, Bizarre, Proof, Fuzz Scoota, Mr. Porter, Bugz, Kuniva, DJ Head, Dirty Ratt, B-Flat, Charging Soldier, Killa Hawk and Chaos Kid. Since so many members either died, left, or got kicked out, they have had a difficult history but are trying to make their 3rd studio album. Fuzz Scoota has rejoined the group as of 2011 for their "Return of the Dozen Vol. 2" but left sometime later due to a dispute with Eminem. The group has released a song named "Bane" which was on Shady Records' compilation album "Shady XV". "Bane" did see the return of Mr. Porter to the Dirty Dozen.

D12 has featured in Bizarre's solo career, Eminem's, and several other rappers. In Eminem's second album, The Marshall Mathers LP there was a track called "Under the Influence" featuring D12 members Proof, Swift, Bizarre, Kon Artis and Kuniva. On Eminem's third album, The Eminem Show there was a track called "When The Music Stops" featuring D12 members Proof, Bizarre, Kuniva, Swift, and Kon Artis. D12 has also appeared in several Obie Trice songs such as "Outro", one of their most popular appearances. They also appeared (except for Kon Artis) on Proof's final studio album Searching For Jerry Garcia on track 11 called "Pimplikeness." The group was also on a few soundtracks for movies that include; The Longest Yard, Shark Tales, & 8 Mile.

D12 was most recently featured on "Shady XV", on track 8 titled, "Bane". The track featured Kuniva, Swifty McVay, Bizarre, and the return of Mr. Porter. Eminem and Fuzz Scoota however, were not on the track.

Eminem has the most notable solo career. He has released 10 albums and several chart-making singles. Eminem works with Royce da 5'9" and other D12 members in their solo careers, he briefly left D12 for his solo career, but upon signing them to Shady Records they wanted him to rejoin.

Bugz had a solo career before he was killed. He made an EP called These Streets EP released in 1999 and an album called Mr. Obnoxious hich was going to be released after his death, but has yet to be. He was the lead singer/MC of the group before Eminem was. (Deceased)

Before Proof's death, he released 2 albums and several mixtapes with other collaborations. Proof was also a member of other rap groups such as Promatic, 5 Elemtentz, and Soul Intent. (Deceased)

Kuniva released a mixtape in 2010 called Kuniva Presents Retribution: The Mixtape. He joined the Dirty Dozen because he was in a duo with Kon Artis called "Da Brigade", and since Retribution he has released the "Midwest Marauders" 3 volume mixtape series.

Mr Porter released a mixtape in 2003 called Po' Folks Mixtape. In 2015 he dropped an EP titled "Stuff In My Backpack". He brought Kuniva into the group as they were in the duo "Da Brigade" together. After his departure from the Dirty Dozen he said "Kon Artis has died" possibly symbolically as Mr. Porter is still a working rapper but his alter ego for D12 is gone.

Swift released a mixtape called Underestimated Vol. 1 in 2008. His second volume was released in 2009. Before, he released a mixtape in 2006 called Forest Fyres. He was requested into the group by Bugz, right before the death/murder of him

Fuzz Scoota, made a few mixtapes & EPs including "'97 Crop Pick" and "Jellybeans".

Eye-Kyu's first song recorded was the D12 song "Dumpin'" from 1996 that was featured on the parts unknown album. He has moved away from Detroit and now is unknown to the public as to where he is, he may always be known as the most mysterious group member, along with Fuzz Scoota. Da Ruckus released "Eye Confess" featuring Eye-Kyu, a song made on an unknown date but it is known that it was released in 1999.

DJ Head was the first DJ & Producer for D12, and even though he left the group still continues to work with them on music including the Dozen's first album "Devil's Night"

B-Flat did leave the same as Fuzz Scoota, and has worked with Fuzz on some of his earlier work including the "P Rock Shit" songs, and a skit or two. The only song he was on with D12 was the song "Dumpin'" which contained verses from fellow members Eminem, Proof, & Eye-Kyu.

Chaos Kid did a large number of songs with Eminem and Proof as Soul Intent in the 90's, but commited suicide as of September 28, 2011 (Deceased)

Three was featured on Eminem's Infinite song "Maxine", it is unknown as to if he is still "Three" or "3" as a local Detroit rapper named "3" was featured on the "Return of the Dozen" mixtape on "13 Emcees"

The Charging Soldier left or got kicked out due to creative differences, just as Bizarre left due to the same issue in 2012. DJ Butter and Kuniva released a picture containing a large amount of the old D12 members , possibly, however the location of the picture is currently unknown to most people, and it is speculated that either Charging Soldier or Eye-Kyu are in the photo.

Retrieved from "https://rap.fandom.com/wiki/D12?oldid=22331"
Community content is available under CC-BY-SA unless otherwise noted.