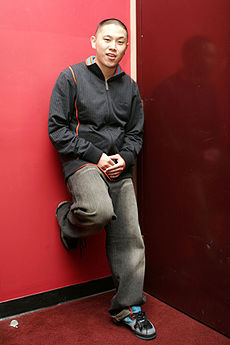 Jin Au-Yeung (traditional Chinese: 歐陽靖; simplified Chinese: 欧阳靖; pinyin: Ōuyáng Jìng; Cantonese Yale: Āuyèuhng Jihng; born June 4, 1982), who performs under the stage name MC Jin(earlier, 100 Grand Jin and Jin the Emcee or even just The Emcee), is a Hong Kong hip hop rapper, songwriter, and actor. Growing up in the Miami, Florida area, and later living in New York City, he decided to reside permanently in his motherland, Hong Kong.[2][3] Because of his multicultural background, he is fluent in both Cantonese and English. Back in the United States, he was both the first East Asian and Chinese solo rapper to be signed to a major record label.

After graduating from high school in 2000, Jin decided to forgo college and moved his family to Flushing, Queens, New York City in 2001. He began performing freestyles and selling his own mix tapes on the streets, in hip-hop clubs and wherever else possible. While battling on the streets he was spotted by Kamel Pratt who then became his manager and they formed Crafty Plugz Entertainment. His big break came when the BET program 106 & Park began inviting local rappers to hold battles in a segment known as Freestyle Friday. He won all seven battles in a row, enabling him to be inducted in the Freestyle Friday Hall of Fame.

That same night of his Hall of Fame induction, he announced that he had signed a deal with the Ruff Ryders. His first single under Ruff Ryders was titled "Learn Chinese". It took a sample from the 1992 song "They Want EFX", from hip-hop group Das EFX. The second and final single for the album was originally supposed to be "I Got a Love" featuring Kanye West, but was later changed to "Senorita" because Roc-A-Fella Records did not want to over-expose Kanye West. The album was originally scheduled to be released in the summer of 2003, but was delayed for over a year by the label. In October 2004, Jin released his debut album, The Rest Is History, which reached number 54 of the Billboard Top 200 albums chart. Both of his singles, "Learn Chinese" and "Senorita", failed to be major mainstream successes. Nonetheless, Jin's music video "Learn Chinese" was the first video ever to be played on MTV Chi.

In 2003, Jin made an appearance in the movie 2 Fast 2 Furious as a mechanic named 'Jimmy'. His song "Peel Off" was featured on the 2 Fast 2 Furious soundtrack. He also collaborated with British Indian Bhangra artist, Juggy D, in the song "Kohl Aaja (Come Closer)", when he was in London doing some promotion for The Rest Is History.

On April 23, 2005, Jin and rapper "Serius Jones" engaged in a rap battle. The battle was featured on Fight Klub DVD

On May 18, 2005, Jin revealed that he would be putting his rap career on hold in order to explore other options. To make this clear, he recorded a song titled "I Quit", which was produced by the Golden Child. The announcement was widely misunderstood to have marked the end of Jin's rap career. However, he later re-emerged under a different alias, The Emcee, and freestyled over such songs as Jay-Z's "Dear Summer." He released a single called "Top 5 (Dead or Alive)" where Jin displays his lyrical talent in explaining the history of hip-hop's greatest artists. The legendary DJ Kool Herc, who is credited as the founder of hip-hop, appears in Jin's music video. After signing with an independent label, CraftyPlugz/Draft Records, Jin released his second album, The Emcee's Properganda on October 25, 2005. Jin was also featured on the Taipei-based pop artist Leehom Wang's 2005 album Heroes of Earth.

Jin and Leehom performed their “Heroes of the Earth” collaboration live in Shanghai on February 16, 2006 at an event arranged by Chinese A&R exec Andrew Ballen. Ballen was also the first promoter to bring Jin to mainland China in 2003 for his “The Rest is History” tour.

Jin released two albums in 2006. The first one, 100 Grand Jin is a mixtape/album that was released on August 29, 2006. The single released off the album is "FYI", for which the rapper shot and released a music video. The second album released in 2006 is Jin's third LP, I Promise.

On Jin's MySpace, Jin mentioned that he is working on another English album named "Birthdays, Funerals and Things In Between". Jin premiered a song called "Open Letter to Obama" on April 24, 2007, which made him become 1st on Barack Obama's Top 8 list on MySpace.

On April 16, 2007, Jin made a tribute song to the victims of the Virginia Tech massacre called "Rain, Rain Go Away". Recently Jin has decided to make his November 1, 2006 Internet album put together by Roy P. Perez© and his team of producers at Romeo Ent., I Promise, available in retail stores. It will be out on October 23, 2007.

Jin released a new song through his MySpace page. The song is titled "Fill In The Blanks", and Jin encourages his fans to record their own verse into the song.

Retrieved from "https://rap.fandom.com/wiki/Jin?oldid=7770"
Community content is available under CC-BY-SA unless otherwise noted.